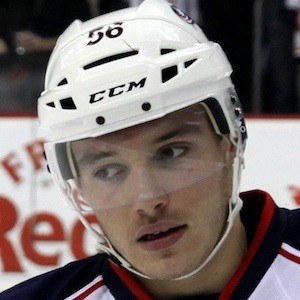 Slovak hockey player drafted 27th overall by the Columbus Blue Jackets in the 2013 NHL Entry Draft who played one season with the Jackets in 2014-2015 before being traded to the Chicago Blackhawks in a multi-player deal.

He played in the 2012 World Junior Ice Hockey Championships for Slovakia.

He was a member of the Slovak men's team at the 2013 and 2015 IIHF World Championships. He spent a couple of seasons in the Kontinental Hockey League with Slovan Bratislava before making his NHL debut.

His father Jozef Daňo played for the 1994 and 1998 Slovak Olympic teams.

He became teammates with Patrick Kane on the Blackhawks.

Marko Dano Is A Member Of