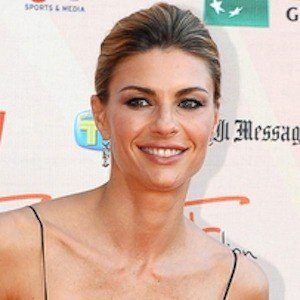 Actress, model and television presenter who has hosted several Italian programs, including Un disco per l'estate. She had a leading role in 2000's Quello che le ragazze non dicono.

She was the winner of the Miss Italia beauty pageant in October of 1991 when she was 16 years old, the youngest to win at the time.

She published an autobiography called La vita e una in 2011.

She was born in Riccione, Rimini, Italy. She married Alessandro Costacurta in 2004 with who she has a son named Achilles.

She had a recurring role in Carabinieri alongside star Manuela Arcuri.

Martina Colombari Is A Member Of