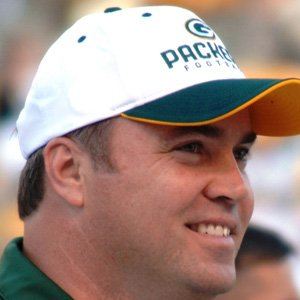 NFL head coach who led the Green Bay Packers to a Super Bowl Championship in 2010.

He began his coaching career as the quarterback coach for the University of Pittsburgh.

He was the Offensive Coordinator for the Saints and the 49ers before being hired as the Packers' head coach in 2006.

He married Jessica Murphy in 2008. The couple has two daughters, named Gabrielle and Isabella. McCarthy also has a daughter named Alexandra from a previous marriage.

He made Aaron Rogers the starting quarterback for the Green Bay Packers in 2008.

Mike McCarthy Is A Member Of