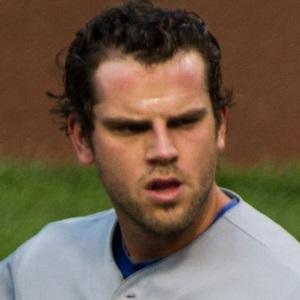 Third baseman who made his MLB debut for the Kansas City Royals in 2011 and hit 20 home runs for the team in 2012. He helped the Royals win the 2014 AL Pennant before falling to the San Francisco Giants in a thrilling 7-game World Series. He then won a World Series Championship with the Royals the following year.

He played baseball at Chatsworth High School in California.

The Royals took him second overall in the 2007 MLB draft.

His father Mike played football at UCLA. In 2014, he married a woman named Stephanie. They have two children; a daughter named Mila and a son named Michael.

Outfielder Jeff Francoeur was his teammate on the Royals.

Mike Moustakas Is A Member Of