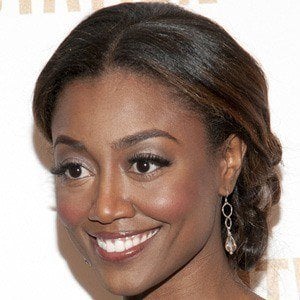 Stage and screen actress who earned a 2013 Tony Award for her performance in the Broadway revival of Pippin. She also starred in the Broadway and London West End productions of Sister Act.

As a young girl, she sang with her church's gospel choir. She later attended Carnegie Mellon University on a musical theater scholarship.

In 2007, she appeared in thirty episodes of All My Children.  She starred in the hit TV Show Madam Secretary.

She was raised in a single parent household in South Carolina. She and venture capitalist David Mars wed on June 14, 2014. Their daughter Emerson was born on August 9, 2017.

She competed to play Effie White in the 2006 film version of Dreamgirls, but lost the role to Jennifer Hudson.

Patina Miller Is A Member Of