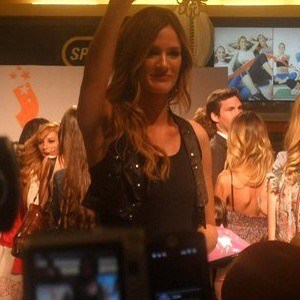 TV show hostess, model and actress who found acclaim when she won the reality show Super M in 2003. She entered the show Bailando por un Sueño in its seventh season as a replacement for Pamela Anderson. She has over 3.8 million followers on her chavespauok Instagram account.

Her career began at age three with an advertisement for Kodak.

She studied theater and dance and in 2009 made her debut as an actress on the show Nini.

She has a sister named Delfina and a brother named Gonzalo. Her parents are Miguel Ángel Chaves and Alejandra Schulz. She has two children with her husband, Pedro Alfonso, named Olivia and Baltazar.

She starred in Ricky Martin's music video for the song "Frío."

Paula Chaves Is A Member Of