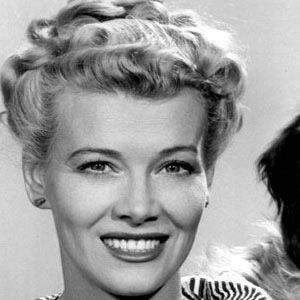 Actress who voiced Jane Jetson in the animated series The Jetsons, and played Blondie in 28 films from 1936 to 1950.

She toured in a vaudeville act called The Kiddie Kabaret, and sang in a silent movie theater.

After moving to Hollywood, she played a dancer in the 1936 film After the Thin Man. Two years later she appeared in Swing Your Lady.

She was born in Philadelphia, Pennsylvania. Her father was a newspaper typesetter. She was married to her second husband, Robert Sparks, from 1941 until 1963.

She was a childhood friend of Milton Berle, and performed on stage with him throughout her youth.

Penny Singleton Is A Member Of