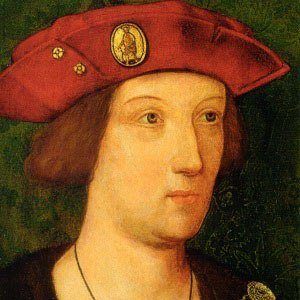 Remembered as the child whose birth united the Houses of Tudor and York and ended the Wars of the Roses, this Welsh royal held the titles of Prince of Wales, Duke of Cornwall, and Earl of Chester.

When he was just days old, he was brought to Winchester Cathedral and baptized and confirmed by John Alcock, Bishop of Worcester.

He died suddenly when he was just fifteen years old. Contrary to popular belief, he was in good health throughout the rest of his childhood and early teenage years.

The son of Henry VII of England and Elizabeth of York and the brother of Margaret Tudor and the future Henry VIII of England, Arthur Prince of Wales married Catherine of Aragon in 1501.

Prince Arthur's father, King Henry VII, had risen to power through defeating the infamous King Richard III at the 1485 Battle of Bosworth Field.

Prince Arthur Is A Member Of