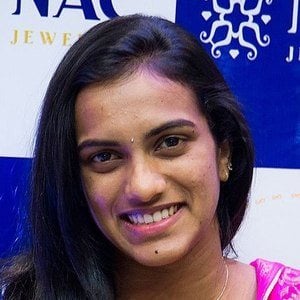 Indian badminton player who has won gold medals in women's singles at the Asian Junior Badminton Championships and Commonwealth Youth Games. In 2014, she was named the NDTV Indian of the Year and the FICCI Breakthrough Sportsperson of the Year.

She began playing badminton at age eight and was coached by Mehboob Ali in Secunderabad.

In 2013, she became the first female Indian badminton player to win a singles medal at the BWF World Championship.

She and Saina Nehwal are two of the world's most famous Indian female badminton players.

PV Sindhu Is A Member Of