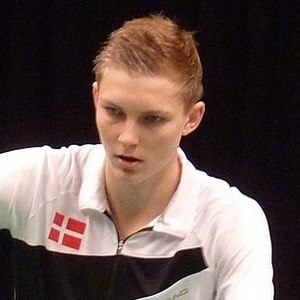 Danish badminton player who won the men's singles world championship title at the August 2017 BWF World Championships. He debuted as the #1 ranked badminton player in the world in September 2017, and as of June 2018, has held that honor.

He rose to worldwide badminton acclaim after winning his first BWF World Junior Championships in 2010. He had previously won his first senior title at that year's Cyprus International tournament.

He won his second European Badminton Championship in 2018. He earned a bronze medal in the badminton men's singles category at the 2016 Olympic Games.

He was originally born and raised in Odense, Denmark.

He defeated Lin Dan at the 2016 Olympic Games to earn the bronze medal for men's singles competition.

Viktor Axelsen Is A Member Of