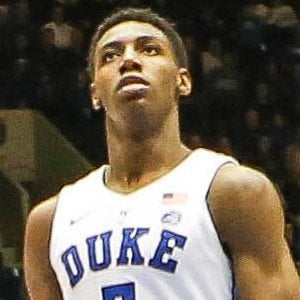 Shooting guard who became the near-unanimous choice as the top recruit in the country coming out of Montverde Academy in 2018. He played one season of college basketball at Duke University before declaring for the NBA. He was selected third overall in the 2019 NBA Draft by the New York Knicks.

He led Team Canada to victory at the 2017 FIBA Under-19 World Cup and was the tournament's MVP.

He is the son of basketball player Rowan Barrett. His mother Kesha was a sprinter.

He is the godson of superstar point guard Steve Nash.

RJ Barrett Is A Member Of