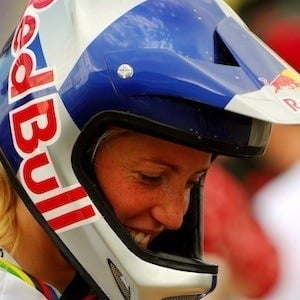 Multiple national championship-winning downhill mountain bike racer who became the first woman to win ten consecutive rounds of the World Cup in June of 2016. She went semi-viral in October of 2015 in a video where she surpassed 91 competitors in just five minutes.

Before she started mountain biking at the age of 11, she was riding BMX when she was just 8 years old.

She has been named Sportswoman of the Year by the Sunday Times' and BBC Midlands in different years.

Her earned the nickname of Waynehead. Her brothers Dan and Gee Atherton are cyclists as well.

She and Greg Minnaar are both champion mountain bike racers.

Rachel Atherton Is A Member Of