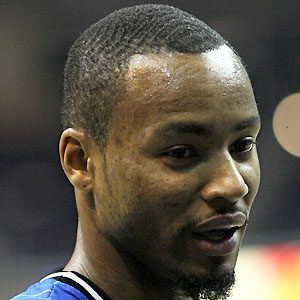 2-time All-Star NBA forward who spent his first 8 seasons with the Seattle Supersonics, then helped the Orlando Magic reach the 2009 NBA Finals where they were defeated by the Los Angeles Lakers.

He was selected 32nd overall by the Seattle Supersonics in the 1998 NBA Draft, directly out of Alief Elsik High School in Houston, Texas.

He signed a 6-year, $118 million contract with the Magic in July, 2007; a contract that many NBA fans and pundits believe to be one of the worst deals in league history.

He married Giovanni Fortes in 2011 and he has three children named Grayson, Gianna and Rashard Jr.

He played alongside center Dwight Howard during his time with the Magic, from 2007 to 2010.

Rashard Lewis Is A Member Of