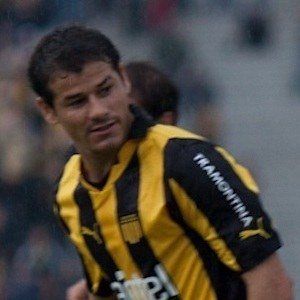 Forward who joined Club Atlético River Plate in 2013 and had immediate success, winning Copa Sudamericana, Copa Argentina and Suruga Bank Championship titles, among others. He has also played for clubs like Defensor Sporting and SL Benfica.

He got his start with Juventud de Las Piedras' youth squad before making his professional debut in 2007.

He was forced to sit out the 2017 season due to necrosis following hip surgery.

His parents are Waldemar Mora and Mary Núñez. He has a son.

He has been teammates with forward Ignacio Scocco at River Plate.

Rodrigo Mora Is A Member Of