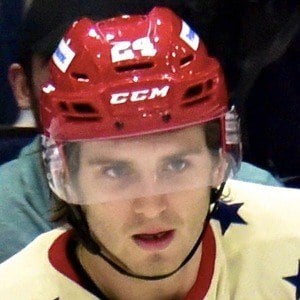 In early 2015, this right wing made his NHL debut with the Chicago Blackhawks. Earlier, playing for the United States National Development ice hockey team, he had won gold medals at both the 2013 World Junior Championships and the 2012 IIHF U18 Championships.

Before becoming a first round NHL draftee, he played for both the OHL team the Plymouth Whalers and the AHL team the Rockford IceHogs.

He spent his early days in West Dundee, Illinois.

He and Marcus Kruger both played for the Chicago Blackhawks in the second decade of the twenty-first century.

Ryan Hartman Is A Member Of