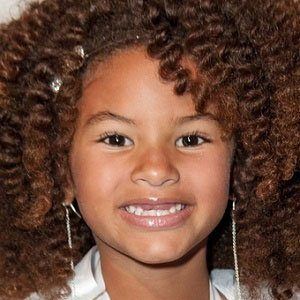 Notable for her role as Emms Booth in the 2014 thriller Within the Dark, as well as for her portrayal of Young Sheila in the 2015 film Sister Code, this child actress also appeared in episodes of Conan, See Dad Run, and American Horror Story.

She made her film and television debuts in 2012, playing a small role in the movie 16-Love and appearing in an episode of the NBC series The New Normal.

She was cast as Daisy Atwood in the comedy movie The Nerd Posse.

The daughter of Yessica and Jason Young, she grew up in Southern California and is of both Latina and African-American descent.

She plays the younger version of Eva Marcille's character in the movie Sister Code.

Sade Kimora Young Is A Member Of