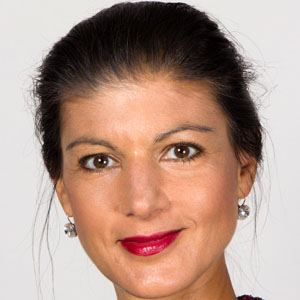 After being elected in 2009 as a Member of the German Bundestag (national legislative body), this politician became Vice President of Germany's Die Linke (The Left) party.

In her younger years, she joined a socialist movement known as Free German Youth and subsequently became a member of Germany's Socialist Unity Party.

She served the North Rhine-Westphalia constituency in the Bundestag.

She grew up in Jena and East Berlin, Germany, as the daughter of a German mother and an Iranian father. After separating from her first husband Ralph-Thomas Niemeyer in 2013, she went on to marry fellow politician Oskar Lafontaine in December 2014.

She earned college degrees in German literature and philosophy. Her thesis dealt with the work of German political philosopher Karl Marx.

Sahra Wagenknecht Is A Member Of