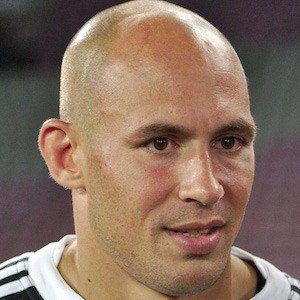 Italian rugby number eight known for his passing skills and exceptional play at the position despite being on a consistently overmatched Italian national squad. He helped lead the country to its first-ever victory over Ireland in the 2013 Six Nations.

He started playing rugby with La Plata in Argentina before moving to Italy to play with Treviso in 2003.

He became the third-youngest player to be capped on the national team, at 18 years and 269 days. He was named captain in 2008.

He was born in Argentina, but grew up speaking Italian as well. His father was also a professional rugby player.

He and Richard Kingi played together on French rugby team Stade Francais.

Sergio Parisse Is A Member Of