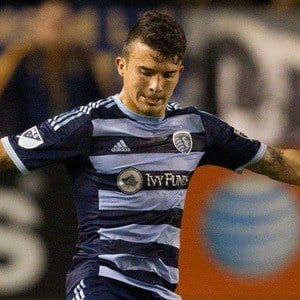 American midfielder who began his MLS career with the Seattle Sounders FC in 2011.

He played college soccer at the University of California, Berkeley from 2007 to 2010.

He was selected 27th overall in the 2011 MLS SuperDraft.

He was born to Servando and Gloria Carrasco. On New Years Eve 2014, he married fellow soccer player Alex Morgan. He and Morgan welcomed their first child, a daughter named Charlie Elena, on May 7, 2020.

He and Omar Cummings both joined the Houston Dynamo in 2013.

Servando Carrasco Is A Member Of