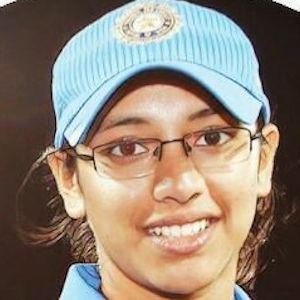 Cricketer who plays for the Indian women's national team. She's a right-arm medium pace bowler and a lefthanded batsman.

She gained notice as a cricket player at a young age. At the age of nine, she was selected in the Maharashtra's Under-15 team and at eleven, she was picked for the Maharashtra Under-19s team.

In June 2018, the Board of Control for Cricket in India named her as the Best Women's International Cricketer.

Her father Shrinivas, a chemical distributor, takes care of her cricket program, her mother Smita is in charge of her diet, clothing and other organization aspects, and her brother Shravan still bowls to her in the nets.

Jhulan Goswami is also a cricketer for the Indian's women's national team.

Smriti Mandhana Is A Member Of