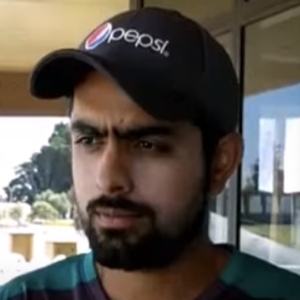 Right-handed batsman who's represented Pakistan in Test, ODI, and T20 competition. He tied a world record by scoring his first 1,000 ODI runs in only 21 innings and set a world record for most runs through 25 career ODI innings, with more than 1,300. In 2019, he was named under the ICC Men's ODI Team of the Year.

In 2012, he captained Pakistan at the Under-19 Cricket World Cup, leading the team to an eight-place finish.

He made his ODI debut in 2015 and his T20I and Test debuts in 2016. He joined the Karachi Kings of the Pakistan Super League and Guyana Amazon Warriors of the Caribbean Premier League in 2017.

He is from Lahore, Pakistan.

He topped Jonathan Trott's record for most ODI runs in the first 25 innings of a career.

Babar Azam Is A Member Of