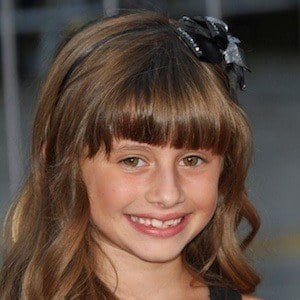 Movie actress whose credits include The Change-Up, Greenberg, and Tooth Fairy 2. She had to learn to dance and perform stunt work for the first film.

She first appeared on camera at the age of six for a worldwide Pampers diapers commercial.

She has been in ad campaigns for Disney, Toys R Us, and H&M and on the cover of Parents Magazine.

Her mom is Jodi Rouviere and her siblings are Kony, Taylor, and Zachary.

She has appeared on screen as Jason Bateman and Leslie Mann's daughter.

Sydney Rouviere Is A Member Of