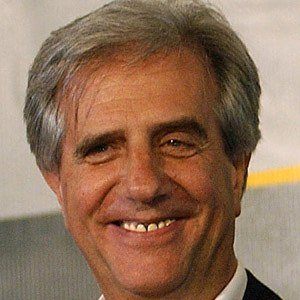 Most Popular#102679
Born in Montevideo, Uruguay#21
Politician Born in Uruguay#3

Politician who was the President of Uruguay from 2005 to 2010. His tenure as President was marked by reforms to education, working conditions, and the welfare system.

Prior to entering politics, he first worked in Medicine, as an oncologist.

He once held an almost 80% approval rating at the start of his career -- an alarmingly high percentage for any politician anywhere.

He had four children -- one adopted -- with wife María Auxiliadora Delgado.

He and Bolivian President Evo Morales were once said to be working on decriminalizing coke as a "dangerous drug."

Most Popular#102679
Born in Montevideo, Uruguay#21
Politician Born in Uruguay#3

Tabaré Vázquez Is A Member Of