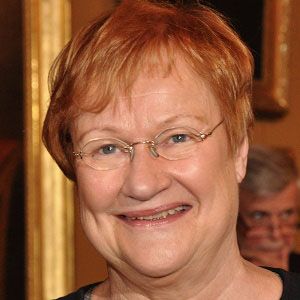 From 2000 until 2012, this Social Democratic Party politician served as President of Finland. Previously, she had held the offices of Finnish Minister of Foreign Affairs and Minister of Justice.

After earning a law degree from the University of Helsinki, she worked in the legal department of the Central Organization of Finnish Trade Unions and served six terms in the Finnish Parliament, as well as several terms in the Helsinki City Council.

Known for her focus on issues of relevance to women and the LGBT community, Halonen was a popular president whose approval ratings peaked at 88% in late 2003.

The child of Vieno Olavi Halonen and Lyyli Elina Loimola, she was born and raised in Helsinki, Finland. Her marriage to lawyer Pentti Arajarvi produced a daughter named Anna (born in the late 1970s).

She was succeeded in office by National Coalition Party politician Sauli Niinisto.

Tarja Halonen Is A Member Of