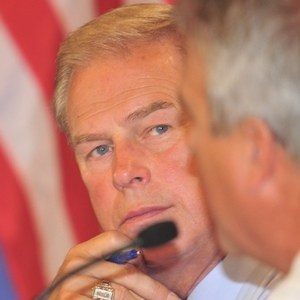 Democratic Party politician who held the office of 68th Governor of Ohio from 2007 to 2011. In 2013 he was nominated by President Barack Obama to be an alternative representative for the United Nations.

He studied history and psychology at Asbury College, graduating in 1963. He went on to receive an MA and Ph.D. in counseling psychology from the University of Kentucky and a Master of Divinity from the Asbury Theological Seminary.

He was one of nine children born to an Ohio steelworker. He later married educational psychologist Frances Strickland.

He was defeated in his 2010 gubernatorial re-election campaign by Republican candidate John Kasich.

Ted Strickland Is A Member Of