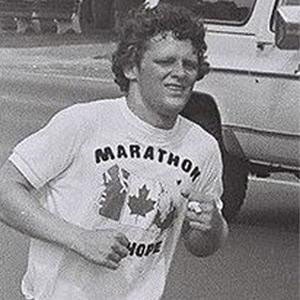 Canadian runner and health activist. While battling osteosarcoma, he attempted to run across Canada on a prosthetic leg to raise funds for cancer research.

Although he was smaller than the average basketball player, he was determined to play for his high school's team and, during his Senior year, earned his school's Athlete of the Year honor.

Outside of Thunder Bay, a statue was erected in his honor in the spot where he was forced to end his marathon run across Canada.

He was born in Winnipeg, Manitoba to Betty and Rolland Fox. He grew up with an older brother named Fred and younger siblings named Darrell and Judith.

Former NBA star Steve Nash, who was inspired by Fox as a child, directed a 2010 documentary called Into the Wind, which chronicles Fox's run.

Terry Fox Is A Member Of