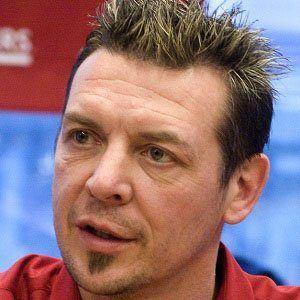 NHL winger known as "Theo" who won a gold medal with Team Canada at the 2002 Olympics in Utah. He played 791 games for the Calgary Flames.

He was forced to play hockey in a very physical way to make up for his lack of height.

He was a seven-time NHL All-Star and won the Stanley Cup with the Calgary Flames in 1989.

He married his second wife, Jennifer, after she helped him through a rough time; the couple would later have a daughter together.

His career highlight came when he helped win the gold at the Olympics for Canada; the captain of his team was the great Mario Lemieux.

Theoren Fleury Is A Member Of