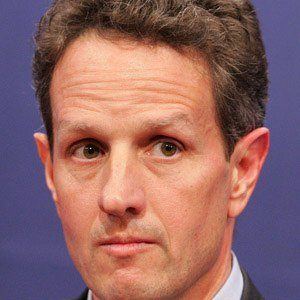 American economist who served as the 75th United States Secretary of the Treasury from 2009 to 2013. He was also the president of the Federal Reserve Bank in New York from 2003 to 2009. He played a major role in allocating the $350 billion of funds from the Troubled Asset Relief Program after the financial crash of 2008.

He spent his childhood in many different countries including Thailand, Zimbabwe, and India.

He graduated from the International School Bangkok, a high school in Thailand.

He married Carole Marie Sonnenfeld on June 8, 1985, and had two children: a daughter named Elise and a son named Benjamin.

He reported to current president Barack Obama as the U.S. Secretary of the Treasury.

Timothy Geithner Is A Member Of