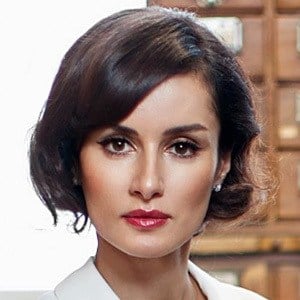 Georgian-born Russian television presenter and journalist who became known for her work on M-Radio, RDV, Biz-TV and Muz-TV. She is also the co-owner of the production and public relations company Apostol Media Group.

She earned a degree in foreign affairs from Russian State University for the Humanities.

Her mother Elvira is a narcologist and her father Givi was an economist. She married entrepreneur Vasiliy Brovko in 2014. Her daughter's name is Melaniya and her son's name is Leontiy.

Shorena Begashvili and Tika Patsatsia are other accomplished television hosts who were born in the country of Georgia.

Tina Kandelaki Is A Member Of