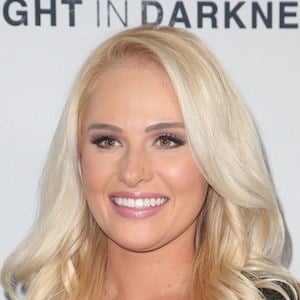 Television and web video host from TheBlaze's Tomi and previously from One America News Network's On Point with Tomi Lahren. She is well known for her incendiary conservative political commentary.

She studied journalism, media, and political science at the University of Nevada, Las Vegas. She hosted the school's political roundtable show The Scramble.

She was an intern for Republican congresswoman Kristi Noem.

She was engaged to Brandon Fricke, but she later called it off. She previously dated military officer Jerad Christian. She was born into a military family and raised in Rapid City, South Dakota.

She got caught up in a controversy after criticizing the performance of Beyoncé at Super Bowl 50.

Tomi Lahren Is A Member Of