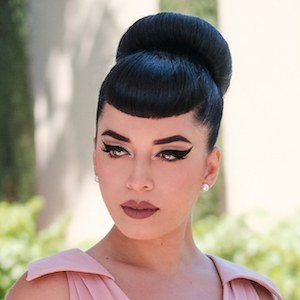 Model and blogger who has built a massive social media following with her vintage pinup aesthetic. She has become known both for sharing her daily style on her blog, Vintage Vandalizm, and for gracing the pages of magazines like Nylon and Playboy.

She first launched her blog, Vintage Vandalizm, in 2008. She'd been working as a sales coordinator and freelance social media manager for Betsey Johnson before launching her blog.

Outside her modeling and blogging career, she has worked as a sample sale coordinator for Christian Louboutin and as a buyer and merchandiser for Pinup Girl Clothing.

Her real name is Jasmin Rodriguez. She is of Puerto Rican descent. Her father was a street car racer and her mother was a breakdancer.

In April 2017, she was chosen to judge the Miss Viva Las Vegas pageant alongside Cherry Dollface.

Vintage Vandal Is A Member Of