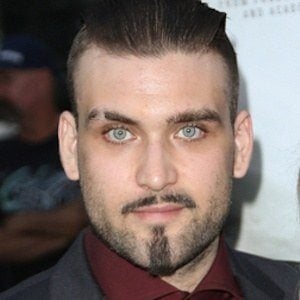 Metal musician and actor most famous for being the son of Oscar-winning actor Nicolas Cage. He released his debut solo album Prehistoric Technology in January 2015 and has appeared as an actor in films like 2010's Raven and 2014's Rage.

He made his acting debut at age 13 in the film Lord of War, which stars his father. He was a member of the wrestling team in high school and began singing for the black metal band Eyes of Noctum in 2006.

A physical alteration between himself and his personal trainer on the streets of Hollywood, California was captured on video and released by TMZ in 2011. The fight left him hospitalized.

He married Hila Aronian in April 2018. He shares a son named Lucian with his second wife Danielle, whom he married in 2013. He was previously previously married to South African singer Nikki Williams from 2011 to 2012.

His song "Annihilate" was featured in the 2014 film Joe, starring his father and directed by David Gordon Green.

Weston Cage Is A Member Of