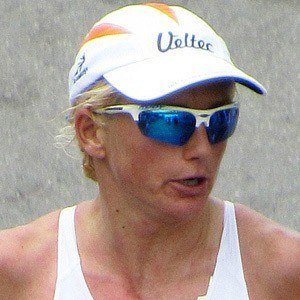 Triathlete who is known for having accomplished a sub-9 hour Ironman distance multiple times, a very rare feat.

She began her sporting career as a soccer player, before shifting her focus to triathlons.

In 2006 she won gold medals at the ITU Long Distance Duathlon World Championships, and at the Powerman Duathlon European Championships.

She was born and raised in Krimpen aan de Lek, Netherlands.

She won a silver medal at the 2008 Ironman World Championships, finishing behind only Chrissie Wellington.

Yvonne Van Vlerken Is A Member Of