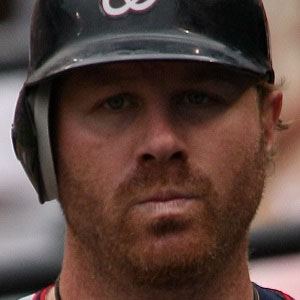 2-time MLB All-Star with over 400 career home runs; hit 40-plus home runs in 5 straight seasons from 2004 to 2008, while playing for the Cincinnati Reds and Arizona Diamondbacks.

He starred in football as a quarterback while in high school before deciding to play baseball full-time.

He became one of few baseball players in history to lead the league in both walks and strikeouts in the same season.

He had a son named Brady with his wife Rachel.

He and Hall of Fame second baseman Joe Morgan became the first two players in Cincinnati Reds history to walk 100 times, score 100 runs and drive in 100 runs in the same season.

Adam Dunn Is A Member Of