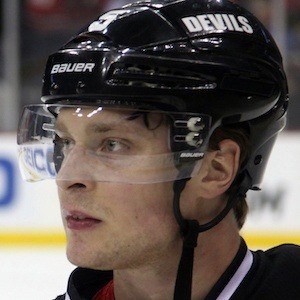 NHL defenseman who was the fourth overall pick of the 2011 draft, taken by the New Jersey Devils. After five seasons in New Jersey, he was traded to the Edmonton Oilers for Taylor Hall.

He grew up playing hockey with Skelleftea AIK of the Swedish Hockey League. He made his NHL debut as an 18-year-old in 2011.

His father, Robert, was a professional hockey player in Sweden. He also has a brother named Hampus.

He became teammates with Andrej Sekera when he was traded to Edmonton.

Adam Larsson Is A Member Of