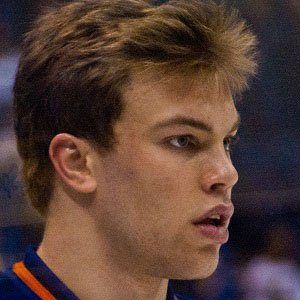 NHL left winger who was selected first-overall by the Edmonton Oilers in the 2010 NHL Draft. After six seasons and 328 points with the team, he was traded to the New Jersey Devils for Adam Larsson in 2016. He now plays for the Boston Bruins.

He was the OHL and CHL Rookie of the Year in the Canadian junior leagues and played on the Canadian national U-18 and U-20 teams.

He was born to Kim Strba and former CFL player and bobsledder Steve Hall. His father made a backyard rink every winter where he'd practice.

He was the first of three consecutive first-overall draft picks of the Edmonton Oilers, who selected Ryan Nugent-Hopkins and Nail Yakupov in the following two years.

Taylor Hall Is A Member Of