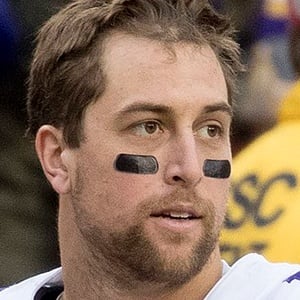 Undrafted free agent wide receiver who first broke out in his third year as a member of the Minnesota Vikings. In 2017, his fourth year, he was named to the Pro Bowl and as a second-team All-Pro.

He was a member of the Minnesota State University Mavericks from 2009 to 2012.

He started off as a special teams ace for the Vikings to earn his spot on the roster.

He was born to parents Pete and Jayne Thielen. In 2015, he married Caitlin Thielen. He has two sons named Asher and Hudson.

He grew up rooting for the Vikings, and in particular Cris Carter.

Adam Thielen Is A Member Of