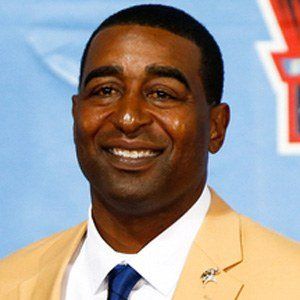 Dominant NFL wide receiver who was inducted into the Pro Football Hall of Fame in 2013 after spending the majority of his career playing for the Minnesota Vikings. He retired with 1,101 receptions, 13,899 receiving yards and 130 touchdowns.

He was drafted in the fourth round of the 1987 NFL Draft after an All-American season at The Ohio State University.

He became a broadcaster on Inside the NFL and Monday Night Countdown after retiring in 2002.

He won the prestigious Bart Starr Man of the Year award in 1994.

Cris Carter Is A Member Of