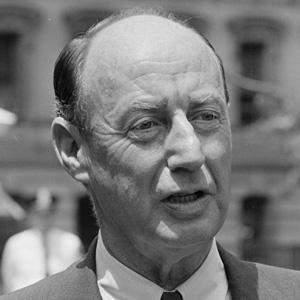 Illinois governor and member of the Democratic party who ran for president in 1952 and 1956. He was also the 5th United States Ambassador to the United Nations was known for his intellectual demeanor.

He worked as a lawyer in Illinois after attending Princeton University, where he became managing editor of The Daily Princetonian and received a B.A. degree in literature in 1922.

Peter Sellers claimed that his portrayal of President Merkin Muffley in Dr. Strangelove was modeled on him.

His grandfather, Adlai Stevenson I served as Vice President under President Grover Cleveland.

He was appointed as Ambassador to the U.N. by John F. Kennedy.

Adlai Stevenson II Is A Member Of