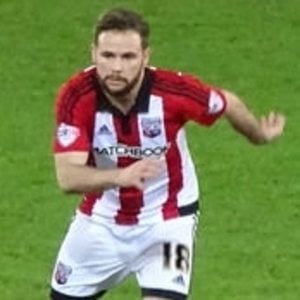 Irish midfielder who has been dubbed "The Irish Messi" by fans and media due to his driving runs and long range goal-scoring abilities. He broke out with Notts County, winning Players' Player of the Year, Fans' Player of the Year and Football League One PFA Team of the Year honors during his years with the squad.

He was born in Dublin and began playing at St. Joseph's National School in 2005. He made his professional debut with Blackburn Rovers at age 17.

His success with Plymouth Argyle in 2009 and 2010 led to him being named the fifth best loan signing in Argyle history by the Plymouth Herald.

His father Dermot captained the Bray Wanderers to victory in the 1990 FAI Cup Final. He has a daughter.

He has played with star left back Jake Bidwell at Brentford.

Alan Judge Is A Member Of