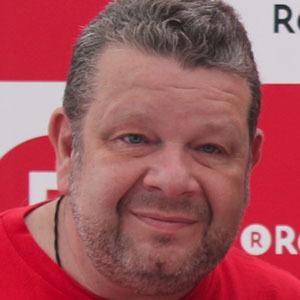 Prominent Spanish chef who has earned acclaim as a pioneer of fusion cuisine through merging Spanish foods with other foreign foods. He has served as a main judge for Spain's Top Chef TV show, and in 2012, began presenting the popular laSexta TV series Pesadilla en la cocina

He studied culinary arts at the Escuela de hostelería de Madrid. He later worked at a cooking apprenticeship abroad in Switzerland.

He opened his own Madrid-based restaurant Yakitoro in 2014. He won the 2011 El Mundo Chef del restaurant de l'any award.

His mother's name is Angelines.

He and Paco Roncero have served as judges together for Spain's Top Chef.

Alberto Chicote Is A Member Of