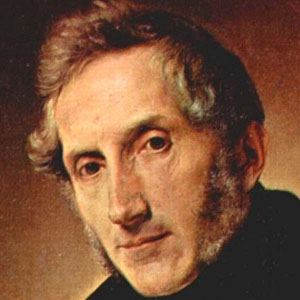 An Italian novelist and poet, he is known for his 1827 masterpiece, I Promessi Sposi (The Betrothed), which is regarded as emblematic of the Italian Risorgimento. He published his first work, Il Conte di Carmagnola, in 1919.

At age fifteen, he wrote his first two sonnets. Shortly thereafter, he became involved with the literary community in the Auteuil district of Paris, where he relocated to be with his mother following his parents' separation and his father's death.

While in school, Manzoni initially appeared to be a slow learner whose intelligence was questioned by faculty and classmates alike.

He married Henriette Blondel in 1808, and the pair lived many happy years in Lombardy. After Blondel's death, Manzoni married Teresa Borri. Between his two marriages, he had nine children.

He was honored posthumously by the composer Giuseppe Verdi, who wrote his famous Requiem as a moving tribute to Manzoni.

Alessandro Manzoni Is A Member Of