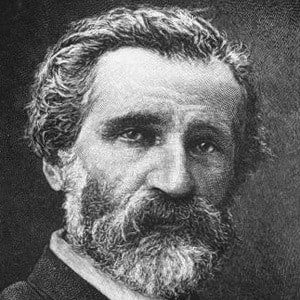 Specialized in operas. He gained fame for "Rigoletto," "Aida," and "Nabucco." He was considered to be one of the 19th centuries' greatest opera composers.

His first opera, 1839's "Oberto," was produced by Milan's La Scala and became an instant success, leading to a commission for three additional pieces.

His beloved wife died while he was developing "Un giorno di regno," his second opera, which would become his first failure and would lead to a period of great depression and self-doubt.

He married Margherita Verdi, a former student, who would die at the age of 26 of encephalitis. He cohabited with famed soprano Giuseppina Strepponi before their marriage in 1859, creating a great scandal for the times.

His masterpiece "Rigoletto" used a Victor Hugo play as its basis.

Giuseppe Verdi Is A Member Of