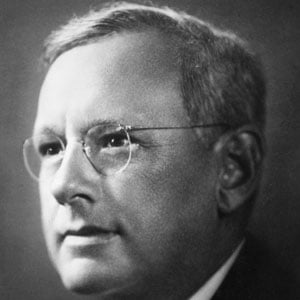 Republican politician who was the 26th Governor of Kansas from 1933 to 1937. He was the Republican Party's nominee for President in 1936 but lost to FDR by one of the largest margins in electoral history.

He served in the Army as a first lieutenant in chemical warfare in World War I before making his fortune in the oil industry.

He was soundly defeated by Franklin D. Roosevelt in a landslide election in 1936, only winning two states and eight electoral votes.

His father was an oilman and moved his family to Kansas when Alf was seventeen.

His support for Theodore Roosevelt first got him the respect of his political peers.

Alf Landon Is A Member Of