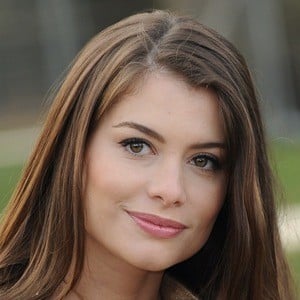 Most well known for her roles as Luciana and Nina on the respective Brazilian soap operas Viver a Vida and Como uma Onda, she also appeared in a handful of films, including Heleno (2011) and O Vendedor de Passados (2015).

Her professional modeling career began when she was twelve years old and lasted until she was eighteen. She made her telenovela debut in 2002 on the series Coracao de Estudante.

She played the first villainous role of her career -- the psychopathic Maria Silvia -- in the soap opera Duas Caras.

She spent her youth in Sorocaba, Sao Paulo, Brazil. In 2014, she and filmmaker Mauro Lima welcomed a son named Pedro.

She was once romantically involved with fellow telenovela star Caua Reymond.

Alinne Moraes Is A Member Of