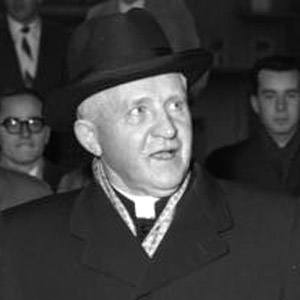 American prelate of the Roman Catholic Church who was the most senior Catholic on the Allied side of occupied Germany.

After studying theology in Europe he was appointed the bishop of Fargo, North Dakota.

Upon taking the post of apostolic visitor to Germany, he published a 10,000-word letter stating in part that the responsibility for the Holocaust lay with a few of the German leaders at the top.

He was born in Milwaukee, Wisconsin, growing up speaking only German at home.

He kept careful record of his correspondence with Herbert Hoover and other American leaders in Germany.

Aloisius Joseph Muench Is A Member Of