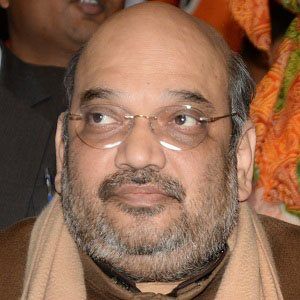 Notable as a longtime Member of the Gujarat Legislative Assembly of India, Shah also served as president of his country's Bharatiya Janata Party.

After earning his bachelor's degree in biochemistry from CU Shah Science College, he briefly worked for his father's piping business, as well as for several Indian banks.

His political career was briefly put on hold following his 2010 arrest for his suspected connection to a high-profile case involving the illegally-carried-out killing of a criminal named Sohrabuddin Sheikh.

He grew up in Mumbai, India, in a family of the Jain faith. His marriage to Sonal Shah resulted in a child named Jay.

During his early years, Shah was heavily involved with a Hindu patriotic organization known as Rashtriya Swayamsevak Sangh. It was through this group that he first made the acquaintance of Indian Prime Minister Narendra Modi, who would become his longtime associate.

Amit Shah Is A Member Of