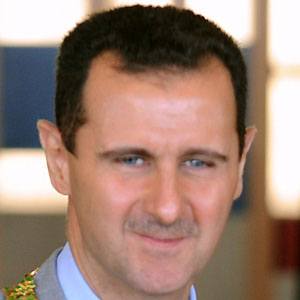 President of Syria who took power in 2000 after the death of his father. He has ruled his country as a dictator and has used his army to kill thousands of his own people.

He worked as a doctor in the army after graduating from medical school at the University of Damascus and was awarded Order of Civil Merit for his time in the army.

The domestic Syrian opposition, the United States, Canada, the European Union states, and the members of the Arab League called for his resignation in 2013 after it was revealed that he used chemical warfare on his own people.

He has three children with his wife Asma al-Assad, whom he married in 2000.

His father Hafez al-Assad served as President of Syria for nearly 30 years.

Bashar Al-Assad Is A Member Of