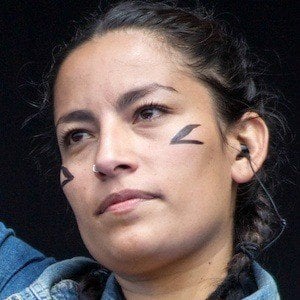 French-born Chilean rapper known for her time with the band Makiza. After the band broke up for good in 2006, she turned all of her attention to her solo rap career.

She started learning to rap while still a preteen and, upon moving to Chile in her mid-teens, formed a rap group called Los Gemelos. She was also a part of Los Tetas before joining Makiza.

She played at SXSW in 2010, where her success even led to an endorsement by Thom York of her song "1977." Her 2014 album Vengo was nominated for a Grammy.

She grew up in France, as her parents had fled Chile after Augusto Pinochet took power in 1973. The family returned to the country in 1993.

She and Julieta Venegas have had success working together.

Ana Tijoux Is A Member Of