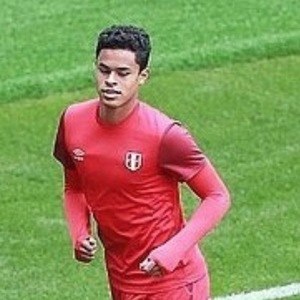 Peruvian professional football player known for his work as a central defender on the Puebla club. He is also known for playing as a left-back and midfielder on the Peru national team.

His youth career began with the Deportivo Municipal club. In 2010, he went on to make his senior career debut with the Ayacucho club. In 2016 he started playing with Melgar and in 2017 made his debut on the Peru national team. He began playing for the Puebla club in 2018.

He is known for having won the Verano 2017 title with the Melgar club.

He was born and raised in Tingo Maria, Peru and shared a photo with his mother to Instagram in May of 2018.

As a player on Peru's 2018 FIFA World Cup squad, he played alongside Paolo Guerrero and Andre Carrillo.

Anderson Santamaría Is A Member Of